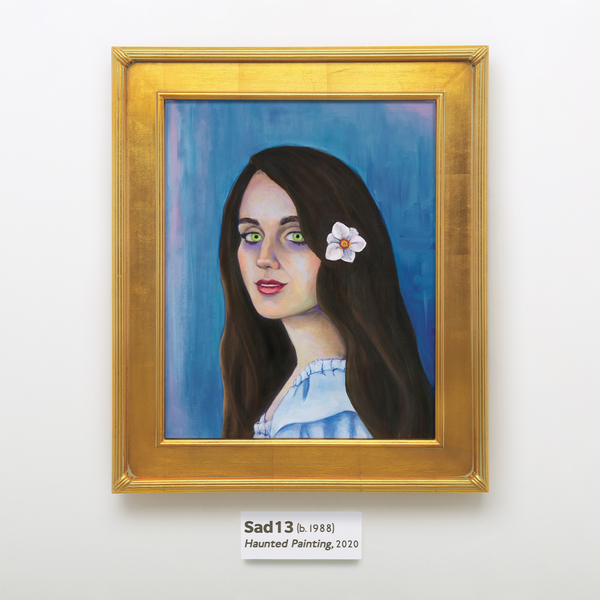 For nearly a decade, Sadie Dupuis has been celebrated for her literary lyrics, accomplished guitar playing, and embodied ethos of empowerment, whether with rock band Speedy Ortiz or the pop-oriented solo project Sad13, which debuted in 2016 with Lizzo co-feature “Basement Queens.” It was followed by the self-produced Slugger, featuring “Get a Yes,” a glitter-bomb of an ode to consent, and other bedroom Top 40 tributes centering feminism and inclusivity. But in the ensuing years, reconciling with a delayed processing of grief, Dupuis felt unable to create new music.

At the Frye Gallery in Seattle, a ghost spoke to her—or an approximation of one. It was an early 20th century painting of the dancer Saharet by German expressionist Franz von Stuck, one of many haunted-seeming gold-framed oil paintings in the gallery: washed-out faces, under-eye circles, expressions that told stories. Looking at these portraits, she related. And she started to write.

Haunted Painting, Sad13’s second album and first for Dupuis’ label Wax Nine (Melkbelly, Johanna Warren), marks her return to artmaking. “Some of these songs feel like emotions that came from a cloud, and I was trying to translate them,” she says. But the scope of a Sad13 song is rarely only personal. As ever, Sad13 weaves timely societal critiques into rushing hooks and whip-smart wordplay that’s all still a blast: riffer “WTD” is about climate gentrification and billionaires’ consequent desire to colonize the ocean and space. Album opener “Into the Catacombs,” which melds orchestral strings with glitched-out horror sounds, came after a 2016 trip to Buenos Aires’ human rights memorial ESMA with her mother, Diane Dupuis—who also painted the Stuck-inspired cover image of her child as a ghost. Haunted Painting braids the political and the poetic, interests that extend to Dupuis’ recent work with No Music for ICE, the Union of Musicians and Allied Workers, and as editor of the newly-established Wax Nine poetry journal.

It all finds Dupuis, already one of the sharpest lyricists of her generation, leveling up as an arranger and producer. Drawing inspiration from 1980s British pop-rock à la Tracy Ullman and Joan Armatrading, as well as the contemporary digital gloss of post-PC Music electronica, she calls Haunted Painting “decidedly non-minimal,” mixing technicolor synth-pop and math-rock dynamism. Accompanied throughout by drummer Zoë Brecher—and, on two songs, by an eight-piece orchestra—Dupuis handles all other instrumentation herself, expanding her palette of guitar, bass, and synth to include organ, lap steel, marimba, glockenspiel, sitar, autoharp, theremin, “toys, trash, and ephemera.” Dupuis tailored her arrangements to the gear lists of six different U.S. studios, scheduling time in between Speedy Ortiz’s festival dates and touring her book Mouthguard. She worked exclusively with women engineers; among those credited are mixer Sarah Tudzin (Weyes Blood, Illuminati Hotties), tracking engineers Erin Tonkon (David Bowie, Esperanza Spalding) and Maryam Qudus (Thao & The Get Down Stay Down, mxmtoon), and Dupuis’ long term collaborator, mastering legend Emily Lazar (Beck, Dolly Parton). The process allowed for a diversity of timbres, as well as guest vocal contributions from Helado Negro’s Roberto Lange, Deerhoof’s Satomi Matsuzaki, Merrill Garbus of tUnE-yArDs, and Pile’s Rick Maguire.

Two of Haunted Painting’s stickiest pop songs were tracked at Tiny Telephone in San Francisco: The heart-tugging “Hysterical,” inspired by the convoluted logic of outdated offense comedians, skewers apathy with wit in a dizzying power-pop rush. “Carve a little piece of my heart, then chop the rest for parts,” she sings. “Hysterical, to laugh like it’s not ammunition.” Revisiting her formative DIY years, Dupuis calls “Ghost (of a Good Time)” her “party song about not going out”—an oddball dance anthem for the introverts and anti-nostalgists among us, inspired by a recent Bushwick basement show with a 1 a.m. start-time she would have tolerated a decade ago.

In a meaningful turn, Sad13 worked at New Monkey Studio in Van Nuys, California, the studio Elliott Smith built out in the early 2000. “He’s one of my guiding influences in composing and home recording,” Dupuis says. “He was kind of a gear nut, and the equipment there reflects it.” She felt a good energy working on her “haunted album” in Smith’s old space, playing his piano and acoustic guitar on the plaintive “Good Grief,” originally written for her father when he was diagnosed with cancer and rewritten to be about “how normal things look surreal after mourning.” There, she also tracked the syncopated, swaggering “Oops...!” —a heavy reflection on her own “vengeance complex” that can crop up in the face of flagrant abuses of power. (“Portrait of a songster: young hussy crossed with cuddle core, 10,000% out for blood,” goes one verse.)

After the New Monkey sessions, Dupuis learned that another hero of hers, the musician and poet David Berman, had suddenly died. She retreated to the bar of Echo Park French restaurant Taix—a favored hangout of beloved L.A. author Eve Babitz—and started work on proggy, 808-and-arp-indebted “The Crow,” thinking of Berman and Babitz both. “The future just confounds me,” she wrote. “Who dares find joy in this terror?” Death leaves her conflicted: “I’ve spent my life working on music, but art can feel inadequate in a world of escalating crisis. Art is not enough to keep your heroes with you. How do we process that?”

How else but with art? Haunted Painting honors that eternal, and complex, impulse. That’s a gift of Sad13’s work: You can’t look away from what’s around you, even—especially—when it’s haunting.